BIHR recently attended and spoke at a conference hosted by Age UK and Age International looking at the rationale behind having a human rights convention for older people. Hanna Gunnarsson, Intern at BIHR, reflects on the day’s events.

The strong themes of the day were the changing demography of the world (by 2050 there will be more older people than young in the world) the gap in human rights protection for older people, and whether or not a convention should be created to fill that gap.

The morning started by looking at the case for a human rights convention for older people, which was introduced by Craig Mokhiber 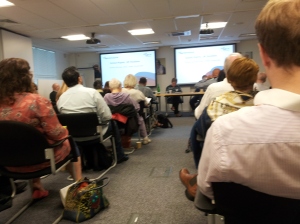 from the Office of the High Commissioner of Human Rights in Geneva through a video link. One of the motivations for establishing a convention is the lack of protection that older people have globally and domestically. Although some protection is given to older migrants, women and disabled people due to conventions that specifically protect those rights, there is a gap in protection for older people who do not fit into those categories. Something Craig called “a remarkable omission” by Eleanor Roosevelt’s team when making the Universal Declaration of Human Rights in 1948. John Williams, Professor of Law at Aberystwyth University, noted that the violation against older people’s rights had a tendency to be reduced and illustrated how their fight was often ridiculed in society by being portrayed as a struggle for “right to family life… and your cat”.

In the second session of the day, the focus moved away from the global to the domestic scene and looked at how different parts of the UK works on strengthening the rights of older people. Representatives from Scotland, Wales and England were there to tell their stories about work going on where they are.  The representative for England Lorraine Rogerson (Chief Information Officer, Equality and Human Rights Commission), spoke about how we need to use every tool there is to push the process of a convention forward and that hopefully on the international level there will be a tipping point towards creating a convention. Andrea Nicholas-Jones (Head of Integrated Services at the Welsh Government) and Duncan Wilson (Head of Strategy and Legal, Scottish Human Rights Commission) illustrated how they are both currently working to ensure that the situation for older people in their constituencies is improving. In Wales they are working for a Declaration of Rights for older people, and which aims to set out the rights and concerns of older people, the main theme of the Declaration is the “right to live free from fear”. The Scottish representative claimed that the Scottish Government has good intentions; but in practice the picture is less positive. They are currently identifying the gaps and negotiating how to fill them. People are living longer, which is something to celebrate but also plan and react to. He recognised that proportionality and interference of the right to a private life, family, home, and correspondence (Article 8 of the European Convention on Human Rights) need to be respected and gave an example of a man named Ken who was suffering from dementia and who had 106 different carers last year to support him, which caused him severe anxiety.

Critique of creating a new convention came out during the group sessions. Some thought that there should not be a distinction between people and a new convention focusing on older people would merely make them into victims that were not in charge of their own rights. Others thought that we already have too many conventions that were not properly used to defend our rights and that the UK should focus on creating more protective rights domestically instead.

After lunch, the conference looked at human rights in practice and the effects of other conventions in the UK. Andrew Latto, the Deputy Director for Work, Welfare & Wellbeing in Later life, Department for Work and Pensions, brought about laughs but there was a hidden gravity of the situation that came out during the Q&A when some delegates put him on the spot by asking critical and constructive questions about how the government was acting on improving the situation for elders. Andrew was then followed by our Deputy Director Sanchita Hosali, who looked at the different sources of protection of human rights and how we can combine them and apply them to our everyday life in the UK. She also defined what the “State” is; not just the Government in the strictest sense but public authorities more widely, who are responsible for providing us with a broad range of services, from policing to healthcare, in a way that respects, protects, and fulfils our human rights.

Afterwards, Zara Todd, a Disability Rights Campaigner, spoke about positive outcomes of the Convention on the Rights of Persons with Disabilities; and Jenny King and Melvyn Harries from Derby Seen Ya Rights talked about the success of their commentary video on the rights of the older LGBT community.

Michelle Mitchell, Director General of Age UK finished off with encouraging words highlighting that campaigning for rights does not go unrewarded. She was referring to Doreen Lawrence, mother of the murdered schoolboy Stephen, who during lunch had received peerage into the House of Lords. As a general endnote, emphasis was put on the need to have a culture change in how we see older people, we need to stop the distinction in how we see our own elders (and how we want them to be treated), with how we see the general demographic population of older people as merely bed-fillers in care homes.

At BIHR we couldn’t agree more, and we’re looking forward to working closely with Age UK Brighton and

Hove to launch our Human Rights Tour in Brighton on 10 September. We will be looking closely at the human rights of older people at this event, if you haven’t booked your place you can do so here. We look forward to seeing you in Brighton!