On the 17 of October 2013, the Human Rights Tour returned to where we set off from, back to the open arms of London. The event was held in partnership with the HEAR Network and the London Voluntary Service Council (LVSC) in Amnesty International’s awe inspiring Human Rights Action Centre.

It may have been the penultimate stop of a gruelling 17 events in 6 weeks of the Human Rights Tour, but from the energy, motivation and dedication of the BIHR staff it felt like the tour was just off to flying start.

The day began with an introduction to the history of human rights. This served as a chilling reminder of the not so distant atrocities of the holocaust and WW2; a world without recognition of basic guarantees of human dignity, control of state power and state accountability. A world without human rights. There really can be no better example of the consequences of gradual erosion of our liberties and the reasons why we must engage with and defend our human rights. Although we may have progressed since the events of WW2 we still need a safety net that harnesses our values and ensures that at least at a minimum we do not regress. The whistle stop through history also reinforced the message that human rights haven’t ‘just fallen into our laps’ nor are they an alien concept to us rather they have always been embedded in our society. The ban on child labour, universal suffrage and the establishment of the welfare state were all achieved using human rights language. This reminder is of particular importance as in the last few months, the Human Rights Act (HRA) which harnesses the values of dignity, equality and fairness has become the victim of unnecessary scathing attacks from the media.

BIHR pride themselves on bringing human rights to life and as always they delivered on their promise. The case studies session, a session thoroughly enjoyed by all, consisted of examining real life cases, situations any one of us could find ourselves in, from being stalked by a former partner to being stopped and searched without reasonable suspicion by the police. In groups we discussed whether any human rights issues were engaged in any of these scenarios. For me this activity was incredibly insightful. As a law student, I have always discussed and studied human rights from an academically conceptual standpoint but this activity provided me with the opportunity to talk about human rights ‘on the ground’ and how those actually involved in the health and social sector approach these issues on a daily basis. Furthermore, what emerged from the discussions with my group, contrary to media reporting, was that there was actually a real interest and knowledge of human rights outside the legal profession as well as a keen interest in learning more and debunking the myths that surrounds the HRA. This felt pleasantly surreal as these discussions illustrated that human rights and the HRA have slowly trickled into our consciousness and become engrained into our society. Human rights is becoming mainstream! 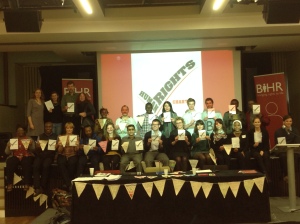 Next on the agenda was prisoner voting, fair trial and our conflicted politicians.

In relation to prisoner voting we were rightly reminded that human rights are rights that must be continuously delivered by the government and adapted to necessitate different situations. Human rights cannot ‘simply be left at the prison gate’- they can never be completely taken away from us.

The BIHR staff where then put on the spot with the tough question of how to reconcile a fair trial with the fairness due to a victim of a crime.  In true BIHR style, not only was this question answered but it was illustrated through another popular case study. The case of ‘Alex and Sadaf’ showed how a trial that is conducted fairly actually benefits the victim of crime just as much as the defendant. It is the job of the police and the Crown Prosecution Service (CPS) to conduct a careful balancing act to assess the value of bringing a prosecution and the impact on the victim. In this case the CPS hadn’t got that balance right, perhaps if they had viewed the case with human rights in mind the outcome could have been different.

In relation to conflicting political statements and commitments of the three main political parties, it was suggested that this was partly due to a lack public awareness raising when the HRA first became law in the UK in 1998. When the HRA came into force the legal profession received training, but very little was invested in informing the public who were intended to benefit from the act. Those of us at the Tour event were galvanised and inspired to speak up for human rights in our schools, local communities and workplaces. The onus is on us to raise awareness and to ensure we know about the Act before we start debating the future of the Act. This would stop our human rights from being used as a political football during election season and compel our politicians to comprehend and appreciate the significance and the utility of the Act in our society.  This message was reiterated by the international appraisal the HRA received. An American member of the audience went as far as saying that the US should adopt a similar mechanism to the HRA as it not only provided ironclad protection of our rights but it was also very ‘people friendly’ as it is committed to settling disputes outside the courtroom rather than encouraging prolonged litigation. Support for the HRA has gone global!

Last but not least my personal highlight; human rights bunting. The rare instance where law meets art. As I walked past a table of beautifully decorated messages which thanked the HRA for its achievements and pledged to defend this vital piece of legislation, I could not help but smile at the fact that the Human Rights Act is not going anywhere; not at least without a fight.