Last Thursday and Friday, BIHR made a guest appearance at the Wales Observatory on Human Rights of Children and Young People. The conference was titled “Rights Here: Right Now” and it was just that: two action-packed days of awareness-raising on children and young people’s rights in Wales. It was extremely well attended by academics and practitioners as well as children and young people who helped organise and facilitate the conference. Apart from the BIHR workshops, the workshop hosted by the Funky Dragon (the Welsh Children and Youth Assembly) was probably the one which I enjoyed most. Due to a withdrawal of  funding, on September 30th the Funky Dragon will cease to exist. Understandably, the sadness in their faces turned to tears by the end of their 45 minute presentation, leaving us all with a sense of remorse and gratitude for their achievements over the past 12 years.

On a brighter note, both BIHR workshops were a success. The sessions focused on the Convention on the Rights of the Child (CRC). On Thursday, the young people in attendance were put to the test in a series of CRC quiz lightning rounds. Each round was a little bit harder than the next. We kicked off with questions about the articles in the Convention and ended with questions on who the major players are in the protection of the CRC. The chocolate prizes that were up for grabs facilitated a fierce but friendly competition. It was a pleasant surprise to see how much these young people actually knew about their rights and the processes which surround the Convention. To top things off, we ended the day with a bit of bunting to celebrate the 25th birthday of the CRC and its poll position as the most popular human rights convention in the world!

The fun continued at Friday’s workshop with an even greater turn out. G 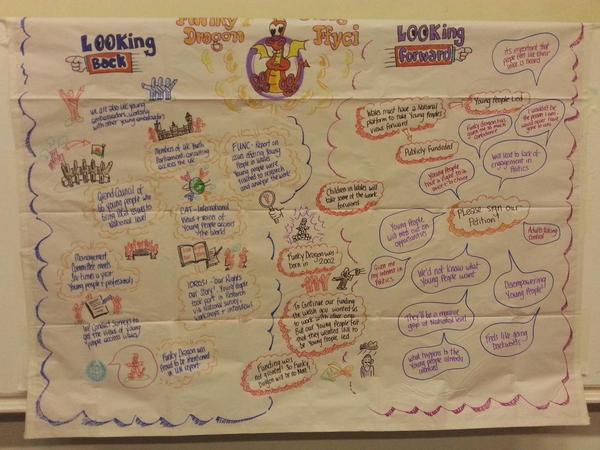 raphic facilitator Ramon Carr joined us at a workshop titled “Map my Rights: A Forward Strategy for Wales”. Each team was tasked with producing a list of recommendations for the Welsh Government on how they can protect the rights of children and young people The teams were also asked to suggest ways that the Welsh government can eliminate obstacles and provide support to help engage young people’s with the CRC and the forthcoming examination (expected 2017). We put our drawing skills to the test with the aid of Ramon as we transferred our written thoughts into visual representations. In between the fits of laughter, there was meaningful and passionate discussion as those in attendance shared what rights they felt they lacked as young people.

The highlight for us all I think, was the presentation of the graphic facilitation from Friday’s workshop at the final plenary of the conference. Those who presented stood confidently before the entire conference as they voiced their shared opinions on what the Welsh Government needs to do next to safeguard children’s rights. It was a proud and powerful moment for everyone in the room.

Whilst young people have so much to say, they are often not given the space to express it. Conferences such as “Rights Here: Right Now” offer the perfect opportunity to bring the voices of young people and children to those with decision making powers. In my opinion, if there is to be progress in the protection and execution of the CRC, more events like this one must be hosted to ensure that this gap is filled.